The UK Polygraph Association have received quite a number of complaints recently about a new examiner to this country from South Africa called Marc Bester or spelt wrong Mark Bester.

As the UKs leading Polygraph Association and register of qualified examiners we are unable to stop Marc Bester from practicing however have denied him membership and explained our reasons to him. Yet still we have received more complaints from clients he has tested so this post is to educate any potential clients about Marc Bester.

A recent complaint that was very alarming concerned Marc Bester testing two thirteen-year-old children and allowing others in the room to watch and video, the poor children had no idea what was going on and needed to be prompted for every answer on the video circulating the internet, now removed to protect the innocent children. UKPA members would never polygraph a child, it’s not ethically or morally right. Nor would they allow someone else in the room whilst an examination was ongoing as it could disrupt the test.

The latest complaint is Marc Bester sending results via email (see picture) signed off with ‘I don’t take calls after a test to explain why a fail etc the results are final. A UK Polygraph Association Examiner will always fully discuss the result with a client and if the results are a fail will endeavour to find out why the subject failed where possible. More often than not this is done face to face after the appointment. Marc Besters approach is not professional and leaves his clients calling other examiners for explanations as it appears he blocks them. Used correctly the polygraph is a very good interrogation tool but post test interview is something UK Polygraph Association examiners will always do. 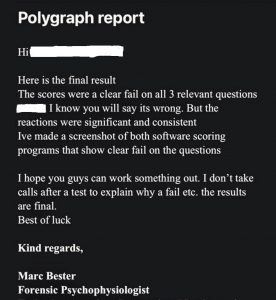 A good examiner and a UKPA member will always manually score all charts and will not rely on computer scoring algorithms, they will only be used as a guide. Sending any such computer generated scoring charts to clients is bad practice as they won’t understand them, especially if the examiner is refusing to talk to the client. We have three results, PASS, FAIL and INCONCLUSIVE, what if an examiner is to say to you that it was only just a FAIL, or only just a PASS, this will help no one and is the reason we have an INCONCLUSIVE result where the score isn’t enough to PASS or FAIL someone. Fortunately, the INCONCLUSIVE result is seen on a very low number of charts, usually less than 5%.

Like many things in life you the client has a choice, in the case of a polygraph test the results can be life changing so make the right choice and choose a UK Polygraph Association member in the knowledge they are competent. A scalpel in the hands of someone with little or wrong training and bad techniques could just as easily kill rather than fix.

Here is the vehicle Marc Bester or spelt wrongly Mark Bester will arrive in, a UK Polygraph Association Examiner will maintain confidentially at all times and travel in a vehicle with no sign writing. 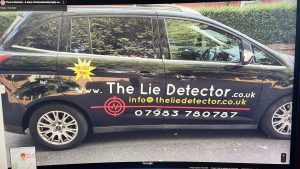 If anything in this blog is factually incorrect please email secretary@polygraphassociation.co.uk and it will be changed immediately. A list of UK Polygraph Examiners can be found here.

August 2022 UPDATE – Another complaint came in today, Marc has tested a foreign lady who understood no English and used her 12 year old daughter to translate. Surprise surprise the lady failed, how did he know what the 12 year old was actually saying ! A UKPA Examiner will only use a real translator and more importantly someone who is independant on the whole situation.

August 2022 UPDATE – Another complaint about Marc Bester, he tested two people accused of sleeping with each other and passed one and failed the other ! You couldnt write it.